The husband and wife were play

The husband and wife were playing on the ninth green when she collapsed from a heart attack. "Please dear, I need help." she said.
The husband ran off saying "I'll go get some help." A little while later he returned, picked up his club and began to line up his shot on the green.
His wife, on the ground, raised up her head and said, "I'm may be dying and you're putting?"
"Don't worry dear. I found a doctor on the second hole who said he come and help."
"The second hole? When in the hell is he coming?"
"Hey! I told ya not to worry," he said, practice stroking his putt. "Everyone's already agreed to let him play through."

“Wounds heal better if they are covered. This is an example of gauze and effect.”

A gynecologist who had lost in...

A gynecologist who had lost interest in his medical practice decided to change careers and enrolled in auto mechanic school.
He performed well in the course but was still shocked when he got an off-the-chart 200 on his final exam. He asked the instructor to explain the grade.
"I gave you 50 points for taking the engine apart correctly," the teacher said, "50 points for putting it back together correctly -- and an extra 100 points for doing it all through the muffler."
#joke
Joke | Source: jokes warehouse - Animal jokes, Blonde jokes, doctor jokes, drunk jokes and jokes of the day

A very successful businessman had a meeting with his new son-in-law. "I love my daughter, and now I welcome you into the family," said the man. "To show you how much we care for you, I'm making you a 50-50 partner in my business. All you have to do is go to the factory every day and learn the operations."

The son-in-law interrupted. "I hate factories. I can't stand the noise."

"I see," replied the father-in-law. "Well then you'll work in the office and take charge of some of the operations."

"I hate office work," said the son-on-law. "I can't stand being stuck behind a desk all day."

"Wait a minute," said the father-in-law. "I just make you half- owner of a moneymaking organization, but you don't like factories and won't work in a office. What am I going to do with you?" Adobe Acrobat Reader - At Olympics | Source : Jokes of The Day - By Jokes of the day visitor


The following is a true story written by an educational psychologist and her experience on a plane.
On a flight to Florida, I was preparing my notes for one of the parent-education seminars I conduct as an educational psychologist.
The elderly woman sitting next to me explained that she was returning to Miami after having spent two weeks visiting her six children, 18 grandchildren and ten great-grandchildren in Boston.
Then she inquired what I did for a living.
I told her, fully expecting her to question me for free professional advice.
Instead she sat back, picked up a magazine and said, "If there's anything you want to know, just ask me." 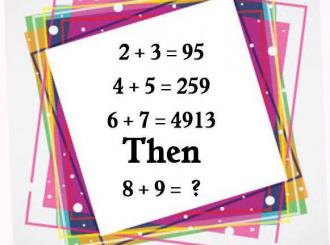 Can you solve this Math Puzzle?